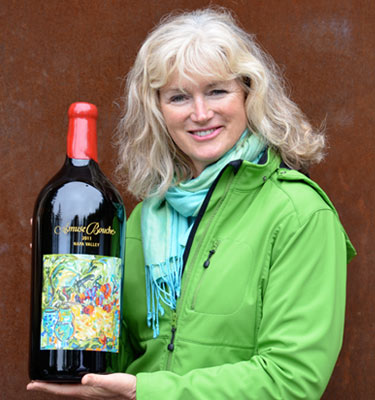 Heidi Barrett grew up in the Napa Valley in a winemaking family and was destined to become one of California's leading winemakers. It is said that winemaking is a combination of science and art. With a scientist-winemaker father and an artist mother it is no big surprise that Heidi was drawn to the wine industry. With great enthusiasm, a love for what she does, and an incredible wealth of experience, Heidi blends the art and science of winemaking like few can.

Through high school, she spent her summers in wineries and vineyards, taking on all jobs from sorting vine cuttings to bottling line work. She then continued her winemaking education at UC Davis. While at Davis she was an assistant to Dr. Ann Noble, the developer of the aroma wheel. Heidi also did an internship at a large co-op winery in southern Germany, which produced many varieties of wine, both whites and reds. There she learned the art of making balanced wines, no matter what the variety.

After graduating from UC Davis in 1980 with a B.S. Degree in Fermentation Science, she went to work for Justin Meyer at Franciscan Vineyards and Silver Oak. After subsequent crush jobs at both Lindeman's Wines in Australia and Rutherford Hill, Heidi Barrett became assistant winemaker to Jerry Luper at Bouchaine Vineyards. Then in 1983, at age 25 became winemaker at Buehler Vineyards. It was here that she first attracted critical acclaim by greatly improving the wine quality and taking the production from 6,000 cases to 20,000 cases. This wide range of experience has given Heidi a unique insight into winemaking. "I think it is important to have a wide variety of experience to draw from. You can't just step in and be the winemaker unless you have a lot of experience in the cellar. I wanted to make sure that when I finally had the title of winemaker, I had earned it."

In 1988, she left Buehler to become an independent winemaker (freelance), making wine for a number of small wineries. Within a week she was hired by Gustav Dalla Valle and was winemaker at Dalla Valle Vineyards until spring 1996. It was there that she took her abilities to the next level creating some powerful yet elegant Cabernets, including the famous "Maya" cult wine, a proprietary Cabernet blend that received two perfect 100 point scores from Robert Parker ( the '92 and '93) as well as record breaking bids at the Napa Valley Wine Auction. She started making wine for Screaming Eagle in 1992, which has also received two perfect 100 pt scores (the '92 and recent '97). A 6-liter bottle of '92 SE set a world record for the highest price ever paid for a single bottle of wine at the 2000 Napa Valley Wine Auction selling for $500,000. A vertical offering of this cult wine went for $650,000 at the 2001 NVWA.

Since 1988 she has developed an impressive client list of ultra-premium wineries. In addition to her very own wines from La Sirena, she is currently the winemaker for Amuse Bouche, Paradigm, Lamborn, Kenzo Estate, Au Sommet, Vin Perdu, and Fantesca. Past winemaking clients include Screaming Eagle, Dalla Valle, Jones Family, Grace Family, Vineyard 29, David Arthur, Barbour Vineyards, and Showket.

"I like the challenge of working with so many different wines. My philosophy is to make the best wines possible with emphasis on the unique characteristics of each individual vineyard. I try to maximize the potential of each vintage in a very balanced, elegant style of winemaking."

Heidi also started making her own wine, La Sirena in 1994 with a tiny production of Sangiovese. "I was looking for a name for my wine which would be as magical as I think wine is. La Sirena which means "the Mermaid" in Italian and Spanish is a way of representing two of my great passions". In 1996 she made the first Cabernet Sauvignon for La Sirena and in 2000 the first Syrah.

In 2002, Heidi partnered with longtime friend John Schwartz to create Amuse Bouche, a Pomerol-inspired Merlot from Napa Valley. Recognizing that the cult wine phenomenon has created an almost aspirational class structure among collectors, the partners decided to make this limited edition wine available to a much broader consumer base. Winemaker Heidi Barrett explains, "We have created Amuse Bouche, a limited edition, superb Pomerol style wine with the added value of limited edition art that is available to consumers through a variety of channels."

She has been a wine judge at various competitions over the last 20 years, was president of Napa Valley Wine Tech, and has graced the covers of both The Wine News and The Wine Enthusiast. She has been a featured guest on several television programs, was winemaker of the year, made Parker's list of wine personalities of the year 1994,1995 and is on Parker's wine heroines list of 1998 (one of two from the US). Parker has dubbed her the "first lady of wine".

Heidi Barrett lives in Calistoga with her husband, Bo (winemaker at Chateau Montelena) and their two daughters, Remi and Chelsea. She is a well-liked and respected winemaker in the Napa Valley. She also very much enjoys being a mom, skiing, painting, and her garden.